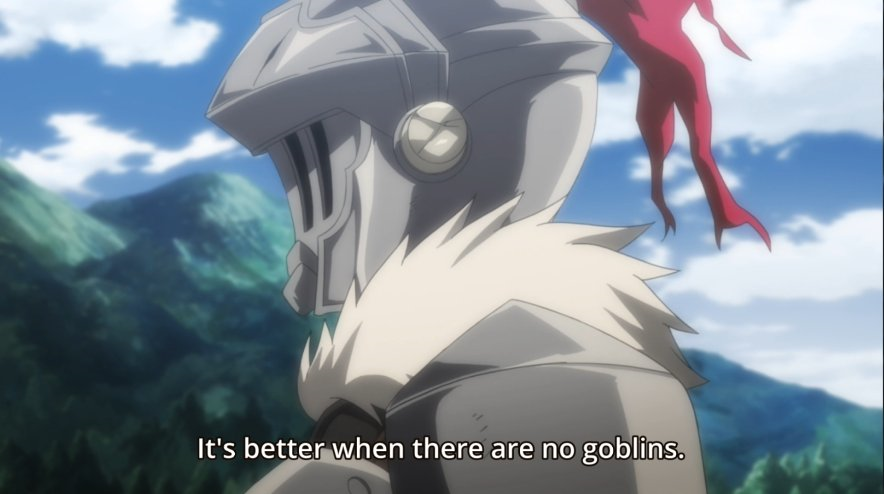 The Goblin Slayer anime recently debuted, with a bit of controversy due to some folks being unaware of the graphic nature of its source material, so this seemed as good of a time as any to encourage people to check out said material!

Goblin Slayer is a dark fantasy light novel series by Kumo Kagyu and illustrated by Noboru Kannatuki. It also received a manga adaptation a few months after the novel series began.

Goblins are often underestimated by low-level adventurers and when they attack in groups, they can be particularly nasty. They pillage, kill, and even rape, without a second thought. In fact, the story opens with a group entering a Goblin nest and being horribly underprepared, only to find themselves all but wiped out save a traumatized Martial Arts girl and a Priestess.

The Priestess is saved by Goblin Slayer and they end up forming a party. It becomes obvious that Goblin Slayer has a one track mind and is a bit socially awkward, but later on as he gets closer to Priestess and finds some more party members, he opens up a bit more.

Goblin Slayer has a childhood friend known as “Cow Girl” who he stays with on her uncle’s farm, paying rent with the spoils he earns from adventuring through the guild; an organizing that hands out quests to heroes for a reward. The relationship between Cow Girl and Goblin Slayer has the potential to be interesting, as it seems Cow Girl hasn’t forgiven herself for an argument they had the day she left and their village was attacked.

A small gripe about the series is that the characters (aside from Goblin Slayer who appears to have a few nicknames) don’t have actual names and are just referred to by their job class or pronouns. It’s not the biggest of problems, but it does break the immersion a bit.

However, Goblin Slayer still manages to be interesting and entertaining. Despite its dark nature, it does have a bit of humor peppered in and it’s fun to watch Goblin Slayer awkwardly respond to character with one-word answers without even realizing how it comes off.

The anime only just started so it is hard to say how the adaptation will turn out, but it’s pretty good so far two episodes in. If you haven’t checked out the light novels or manga, then you should definitely give it a chance if you’re into dark fantasy that plays out like a brutal D&D campaign.

You can find the English translated light novels and manga from Yen Press here: