“Memories”…proof of a life lived.

The Longest Five Minutes is a game I had been looking forward to since I learned of its existence last year. It’s a retro-style RPG that is a combination of some things you would expect of the genre with a few twists; such as some visual novel-style elements where you get to make your own choices. The most unique part of The Longest Five Minutes is that you start the game at the final five minutes of your adventure.

“So the game is only five minutes long,” you ask? Well, only from a story perspective. In actuality, you’ll probably find yourself adventuring for about 10-15 hours. You start at the final battle with The Demon King and the hero, Flash, realizes he has lost all of his memories and has no idea who his friends are or what he is fighting for!

Flash’s friends and party members try to help him remember while holding off the Demon King’s relentless attacks. Remembering your past adventures to learn who you are and why you are on your journey is the object of the game, and that’s where the player comes in: you play through different scenarios of Flash’s memories and complete various quests in order to “reexperience” your adventure and get your memory back. The “side quests” mostly amount to fetch quests for NPCs, but there are some interesting interactions that help keep it entertaining. 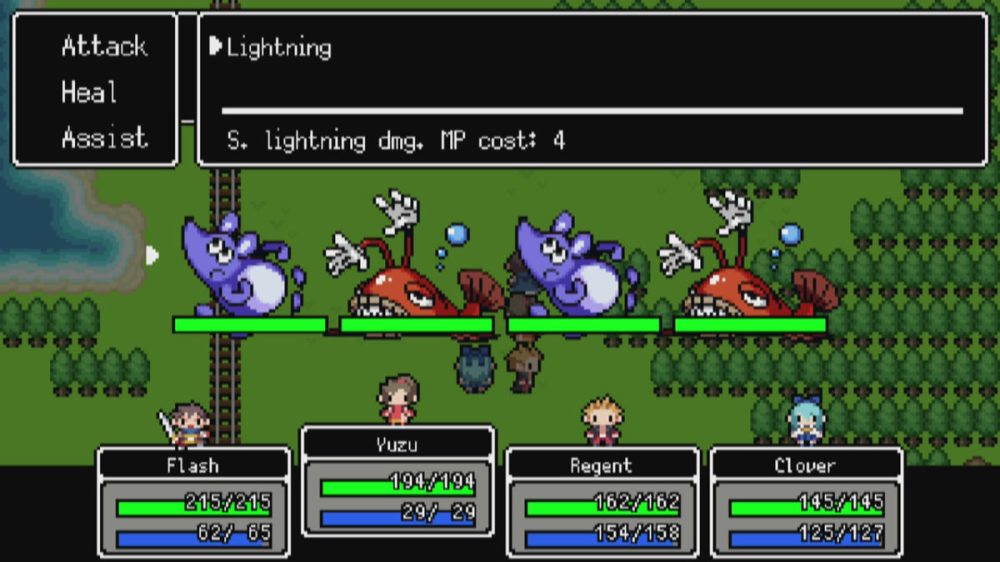 The battle system is reminiscent of the Dragon Quest and Mother series, and despite not being able to see the enemies on the map, the random encounter rate is fairly reasonable in comparison to other games in the genre. The enemies themselves range from typical to silly, with some great designs. The regular attacks are rather basic visually, but there are some impressive spell animations.

Due to the way the game is structured, there isn’t any need for grinding, as you start off each scenario at the level you need to be. You will occasionally gain levels in battle, though. You can simply cast “repel” if you ever get bored of encounters and want to advance the story faster. There were only a few points where I felt the need to take a break from battles, particularly in two longer dungeons toward the end.

This scenario by scenario structure also makes buying equipment and items largely unnecessary, because your items don’t carry over from one scenario to the next. However, you’re usually equipped with or find the next best items on your journey. Some may find this to be a detriment, but once I got used to the idea, I found it to be a refreshing mechanic that sets it apart from the usual style.

Each scenario usually has 1-3 goals, and you gain most of your experience from completing scenarios and gaining Exp. based on whether or not you completed the main quest and the optional side quests. There are a few mini games in the side quests, a game where you shoot arrows at Prinnies, an auto scrolling runner/platformer where you collect coins, and a very frustrating slot machine game (seriously, I could barely get any wins). The games (minus the slot machine) are fun, but it was somewhat of a challenge to conquer the high score. 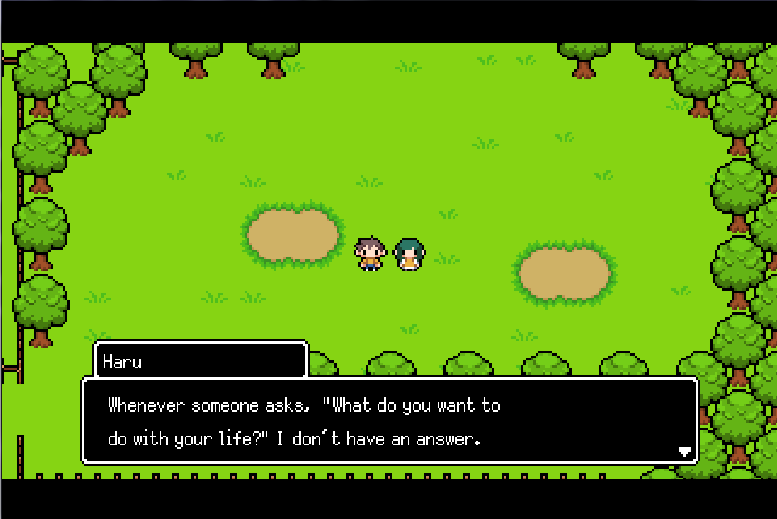 One of the game’s strongest points is its story. On the surface, it is a cliche “hero must defeat the demon king to save the world” narrative, but it was surprisingly deep. The characters interact with each other as if they’re real people. You really get the feeling that they’re friends who laugh, cry, love, and adventure together. The dialogue is well-written and has a great combination of humor and emotion. I found myself relating to many of the themes. The value of memories and the way they shape who we are is something everyone can relate to on a personal level.

The characters all have their own motivations and idiosyncrasies, and throughout your quest you will learn their backstories. Aside from your main party, once in a while you’ll swap out one of the main members for one of your other childhood friends and help them on their own quests. Even the NPCs have a lot of personality, and you’ll often find yourself laughing at or finding some emotional value in what they say.

Without spoiling too much, there are two characters that you will learn about in the final “4 minutes” of your adventure, and one of the complaints I saw was that it wasn’t enough time for you to care about them. However, I think given the story, the writers did a good job at making you care about characters that didn’t get nearly as much screen time as the others. I admit, it would have been nice to spend more time with them because they were interesting. Still, they created a tragic and hopeful story that will give you much to think about even after the adventure is over.

Most of the criticism I’ve seen stems from the idea that the game isn’t what it “should be” or “could be” compared to other JRPGs, but I think that is looking at it all wrong. The Longest Five Minutes is exactly what it set out to be, and while it could be “better,” in some regards, it does what it meant to quite well. My main gripe would be the price is a bit high at $39.99, and should be at least $10 cheaper for what it offers.

If you’re looking for a more story-driven RPG that makes up for in heart what it lacks in challenge, then I highly recommend giving The Longest Five Minutes a try. It will be a memory you won’t forget.

You can get a copy here:

Special thanks to NIS America for giving me a copy of the game!

Be sure to check out the Hobby Scratch Amazon Store and my other affiliates to help support the site!