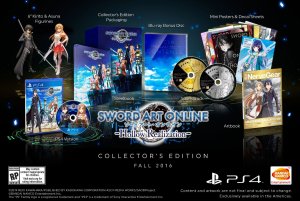 Sword Art Online: Hollow Realization for the Playstation 4 is the 4th game in the SAO video game series, and the successor to last year’s “Lost Song” game. From the information available so far, it appears to be a very ambitious project. The game boasts 4 character parties (up from the previous 3), in-game character customization, with gender, height, weapons, figure, and changeable physical appearance; over 300 NPCs that will all be recruitable to join the party. The battle system is said to be based off of Hollow Fragment’s, but with more action elements included. There are chain attacks featuring the “Switch” system from the series with charge attacks and aerial combos.

The game features monsters new to the series and will also have online multiplayer, which will make for a more authentic MMO experience. The story is being supervised by Sword Art Online’s creator Reki Kawahara to ensure an authentic SAO experience. The story takes place 3 years after the original SAO incident in a new incarnation of the game known as Sword Art Online: Origin. The main character appears to be an AI named “Premiere”, alongside Kirito and other staple characters in the universe.

Making this release even more exciting is the awesome collector’s edition package. It looks like Bandai Namco is really going all out with this release and it’s nice to see a well-thought out collector’s package for a Western audience, especially when it comes to a Japanese franchise.