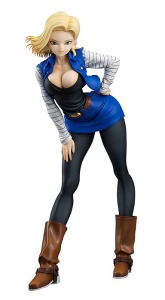 Android 18 is my favorite character from Dragon Ball. Unfortunately, Toriyama has a habit of creating really amazing characters and then allowing them to fade into the background in favor of Goku and Vegeta (though even Vegeta takes a backseat to the power that is Goku). I feel as though #18 is one of many characters that has suffered most from “Toriyama syndrome”. I would have loved to learn more about her backstory and see her take a more prominent role in the series, but I doubt this will happen even with the newest incarnation: Dragon Ball Super.

Being a fan of a character that isn’t in a lead role can be a bit frustrating sometimes when it comes to collecting merchandise, though over the years I have managed to pick up some really cool goods, which I’ll have to share at some point, but I digress. #18 figures are few and far between, so when a new one comes out, I’m interested.

What we have here is another in the “Dragon Ball Gals” line from Megahouse. Megahouse makes some really great figures, and although they have chosen to give #18 a more dōjinshi style design (complete with exaggerated breasts), it’s not so bad that I would write it off. Quite the contrary, actually. I’m not one for randomly increasing the breast size of more modest anime characters, as there are certainly enough ridiculously proportioned anime characters out there to fit that sort of interest, but I have to admit that the design and quality of this particular statue looks great.

The pose is slightly seductive, but I think it’s supposed to somewhat mirror the way she leaned in to kiss Krillin in one of the most surprising scenes in the series, so it’s fitting enough. As far as “sexualized” poses go that I’ve seen on some figures, this is rather tame in comparison. Some people seemed to be unhappy with it, and while I think some of the reasoning is valid, that doesn’t necessarily make this a bad choice, and let’s face it, fans have drawn far worse.

a few people seem to care way too much what others think based on their interests. People who aren’t interested in anime don’t realize that the medium of “anime” is like that of “movies”, where there are varying different genres.

Regardless of what your take on this may be, there is no arguing that Megahouse figures are of excellent quality and though they can be a bit pricey, they’re definitely worth displaying on your shelf. I for one am excited to have a new iteration of Android 18 and I hope they’ll create some more interesting designs in the future, though a different outfit would be nice next time around.

Dragon Ball Gal’s Android 18 measures about 7.5 inches and comes out in September 2016.

Pre-order her on CD Japan or Play-Asia! Try Amazon, too!